Patients ,their relatives and Hospital Staff attached to National Hospital ,Colombo are being faced with a serious 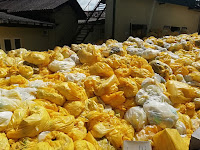 health problems due to the bad smell releasing from thousands of  Clinical and Surgical waste bags not being destroyed for a period of  one month and piled  at the backyard of the National Epilepsy Center attached to the  Hospital according to the All Ceylon Nurses Union.

Due to the Clinical and Surgical Waste bags contains tonnes of Clinical and surgical waste including Gauze and cotton with body fluids and used needles ,syringers and body fluids removed from wards and theaters there's a threat of  transporting the waste  by animals and  rain water to the drains and common water sources the Union has stressed.

Although there's a system of destroying  Clinical and Surgical waste removed from the hospital it was not implemented during a month period due to an external problem it has been learnt.

If the waste entered to common water sources serious infectious diseases can be spread in the city through that the acting President of the Union Nursing Officer H.S.M.B Madiwatte has stated.

Although the Hospital staff had informed on this situation to the Health Ministry so far no action has been taken in this regard.
- August 28, 2018