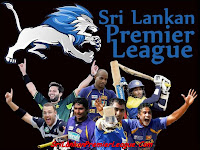 The New Sri Lankan Interim Cricket Committee has today decided to postpone the first edition of Sri Lankan Premier League 20-20 Cricket Tournament which is earlier scheduled   to begin on 19th of July till August Next Year(20120 .This decision was taken by the New Cricket Interim Committee and the League Organizers  Singapore Based Somerset Entertainment Ventures during a meeting held today.

The Cricket Authorities also decided to hold a 20 -20 Inter Provincial Tournament with the participation of National Cricketers  at the period which earlier planned to conduct the Sri Lankan Premier League Tournament.
- July 08, 2011 No comments: