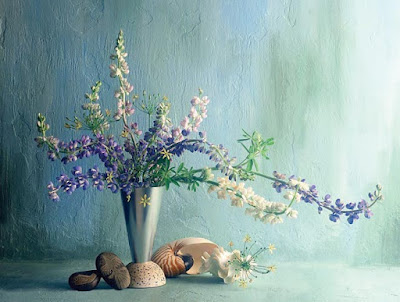 HERE IS A COLORFUL OIL PAINTING DONE BY FAMOUS ITALIAN ARTIST LEONARDO
DA VINCI  ON STILL LIFE FLOWERS.NOT ONLY IN PAINTINGS LIKE THIS ARTISTS ARE USING DIFFERENT COLORS TO EXPRESS FEELINGS LIKE SADNESS AND HAPPINESS IN   THEIR ART WORKS.EVERY ARTIST NOT USING THE SAME COLOR COMBINATION TO EXPRESS THESE FEELINGS AND IT DEPENDS ON THE ARTIST.

The Asian Development Bank(ADB) Has decided to offer a loan worth  US Dollars One Billion to Sri Lanka in view of uplifting the educational facilities of the country within next five years.

This loan is reported as three times higher than the loans that Sri Lanka have been received from ADB during last three years.ADB has decided to offer this loan to show  it's support   towards  the education policy prepared  by  new government according to the government sources.

The Colombo Public Health Department is due to be filed two court cases soon against the warden of one of the Students Hostels at Colombo University Law Faculty and the officers of Administrative Building of the same  faculty over maintaining dengue mosquito breeding places in faculty premises  according to Chief Medical Officer Of Colombo Dr.Ruwan Wijemuni.

Six male students reside in one of the hostels of Colombo University Law Faculty have been admitted to the Colombo National Hospital yesterday (27)as they are suffering from  Dengue Fever  and one student is reported as  in critical condition   at Intensive Care Unit(ICU) .

Soon after the students were admitted to Colombo National Hospital ,The Colombo Public Health Department officers lead by it's Chief Medical Officer Dr.Ruwan Wijemuni have inspected the Colombo Law Faculty Premises and found a disposed Tyre with a large number of Dengue Mosquito Larvae near the Hostel that those student were reside in.According to Dr.Wijemuni the dengue mosquito larvae that breeds inside the disposed Tyre was the cause for spreading Dengue among six students at the hostel.

The Public Health Department Officers have also found that sis tans of two of the Toilets in side the main building of Colombo University Law Faculty have broken and due to leakage of water from those toilets a mosquito breading environment has been created.

The officers have instructed the administrators of Colombo Law Faculty to clean the premises with immediate effect.
- August 27, 2015 No comments: