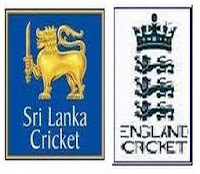 England has take 1-0 lead in their Three Test Match Series against Sri Lanka today when they defeated Sri Lankans by an innings and 14 runs in a rain affected first test match finished at Cardiff in Wales.Sri Lanka who batted first after winning the toss scored 400 runs in their first innings and England has  scored 496/5 and managed to restrict Sri Lankans to 82 runs all out  in their second innings.

The match started late today due to the overnight rain.The Second Test Match is scheduled to begin at Lords on this Friday.
- May 30, 2011 No comments:

The Government has today decided to temporarily suspend the Proposed Private Sector Pension Scheme which created tension amongst  Private Sector Employees.The Decision was made by the Central  Committee of the governing Sri Lanka Freedom Party(SLFP).

Government has also decided to exclude Free Trade Zone Workers from the proposed Private Sector Pension Scheme as a response to the requests made by Parliament MP's and Trade Unions.

Meanwhile Government has announced that the Katunayake Free Trade Zone will closed tomorrow as a step to bring Industrial Peace in the area.
- May 30, 2011 No comments:

After using tear gas  a tense situation erupted between the police and protesters  as the protesters began throwing stones at  police.Police Officers as well as protesters were seen washing  their faces with water due to the tear gas.Several  Protesters were arrested by the Police and seen beaten them.Some Police Vehicles parked near the protest too got damaged as they were hit by  stones.
- May 30, 2011 No comments:

Smoking has been caused Rs.15 million losss to the Sri Lankan Economy daily according to the Executive Director of  Alcohol and Tobacco Information Center "ADDIC" Mr.Pubudu Sumanasekera.

S peeking at the Media Seminar held today in Colombo to Mark 'World No Tobacco Day" falls tomorrow(31) Mr.Sumanasekera has said that one of the major causes for poverty  in Sri Lanka is Cigarette Smoking.He stressed that the Samurdhi (a monthly allowance given to the selected low income groups by the Government) Beneficiary has spend more then twice the amount they received as samurdhi allowance for Cigarette Smoking  and that figure stands in 2002 as Rs.1825 Million when Government allocated Rs.834 Million for the allowance.

Meanwhile the Secretary of the Committee on Tobacco and Alcohol attached to Sri Lanka Medical Association (SLMA) Dr.Sajeeva Ranaweera has suggested that if the Government can Increase Tax imposed on Cigarettes by 10 percent it will help to reduce  usage of Cigarettes by 3 percent among the youth and people in poverty as well as increasing the tax income of  government.

The theme of this years World Non Tobacco Day is "WHO(World Health Organization) Framework Convention On Tobacco Control".
- May 30, 2011 No comments:

Former National Information Officer of  United Nations Colombo Office Mr.Mohan Samaranayake has been appointed as the new chairman of Government owned Sri Lanka Rupavahini Corporation with effect from today according to the government sources.He replaced the out going chairman Mr.Sarath Kongahage.
- May 30, 2011 No comments: