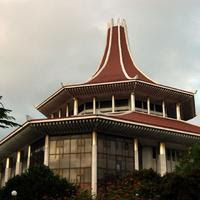 The Parliament has approved the findings of Parliamentary Select Committee (PSC) which inquire on impeachment motion against chief justice Dr.Mrs.Bandaranaike with 155 parliament mp's voted in favor and 49 voted against it.

Many western countries including USA,UK and Commonwealth criticized Sri Lankan government on it's decision to impeach chief justice and appealed to hold a fair trial on impeachment.International Committee On Jurists too condemned the move.meanwhile the Bar Association Of Sri Lanka the biggest trade union of  sri lankan lawyers recently  vowed publicly that the association will not welcomed the new chief justice under present circumstance while lawyers collective has called all supreme court judges not to recognize newly appointed chief justice.

Meanwhile lawyers were engaged in several protest campaigns during last week opposing parliamentary debate on impeachment motion against chief justice by  stating according to supreme court's interpretation of sri lankan constitution parliamentary select committee has no authority to inquire on chief justice.