The Visiting British Prime Minister David Cameron has meet Northern Provincial Council Chief Minister C.V  Vigneshweran this evening at Public Library in Jaffna and hold talks according to political sources.the subject of the talks were not known and their meeting was  held amidst  protest from relatives of disappeared persons in Jaffna who were gathered out side the library building.the local and international media personal  were not allowed to cover these talks sources have added.

British premier has reached palaly air port through a army helicopter this evening and then went to Jaffna from there.as  British premier  arrived Jaffna this evening after attending inauguration ceremony of Commonwealth Meeting in Colombo he  riot police with baton and shields have seen deploying in the area to strengthen  security .


Although foreign media personal present near Jaffna Library were allowed to cover the protest campaign of relatives of disappeared persons local media personal have faced enormous difficulties when covering that event too according to reports.
- November 15, 2013 No comments:

Commonwealth Meeting 2013 Was Inaugurated In Colombo 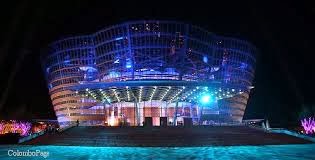 The theme of this year's summit is “Growth with Equity; Inclusive Development"following the inauguration ceremony ,the heads of states attending the summit will meet and discuss important issues related to their countries .the venue for the discussions is Bandaranaike Memorial International Conference Hall(BMICH) in Colombo.
- November 15, 2013 No comments: