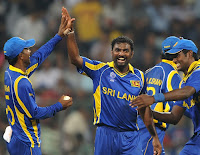 Sri Lankan Cricketers boost their confidence further for the Quarter Finals encounter by beating the News Zealanders from 112 runs  at the ICC World Cup Cricket Match played in Wankhede Stadium in Mumbai,India today.

After winning the toss Sri Lankan Skipper Kumar Sangakkara has decided to bat first in a perfect batting pitch and Sri Lankans able to score 265 runs for the loss of 9 wickets during their 50 overs.Skipper Kumar Sangakkara him self scored a superb knock of 111 runs  with 2 sixes.He was well supported by his Deputy Mahela Jayawardena who scored patient 66 runs and added 145 runs for the third wicket with Sangakkara.

Both Sangakkara and Jayawardena build the Sri Lankan Innings after  both openers Upul Thranga and Thilakaratne Dilshan were out forlow scores.After the pair dismissed Middle Order Batsman Angelo Mathews scored a useful 41 runs to take Sri Lankan Score to 265 runs.

When the New Zealenders came to bat to score 266 runs for win Sri Lankan seemers Nuwan Kulasekaera and Angello Mathews able to keep their run rate low through a tight bowling .However it was Sri Lankan Spinners that destroyed the New Zealend batting line up led by Sri Lankan Ace Spinner Muththaia Muralideran who got 4 wickets by conceding just 25 runs in 8 overs.He was well supported by the Spinner Ajantha Mendis who got 2 wickets and Thilakaratne Dilshan who got 1 wicket..


With this win Sri Lanka who completed their 6 matches in the preliminary round came to the front in the table of " Group A"with 9 points from 6 games.Even before today's game the Lankans already qualified for the quarter finals of  ICC World Cup.

However the voter turnout reported at the elections is low and only 45 percent out of the total number of eligible voters cast their votes in yesterday's elections.
- March 18, 2011 No comments: