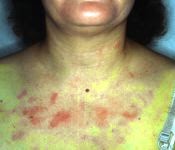 While addressing a press briefing held in Colombo yesterday(09) the president of the  Sri Lanka Food And Drug Inspectors Association Mr.Damith Perera has said that these allergies have been caused due to both registered and unregistered cosmetics and majority of them were due to the hair dyes .

\The samples related to these complaints on allergies were sent to the National Drug Quality Assurance \\Laboratory for further tests he has said.
\
Due to these allergic reactions of cosmetics people should check the registered number ,the manufactured date and the expiry date of the products before purchasing cosmetic products  Mr.Perera has further added.
- July 10, 2014 No comments: