,more than 1000 daily had been performed annually in Sri Lanka although abortion is illegal in the country according to the Consultant Community physician Dr.Sanjeewa Godakanda attached to family health Bureau.

Majority of the females who are undergoing the abortions are married females attached to rural and  semi urban sectors and teanaged females  are  also among them Dr.Godakanda  has stressed.

Addressing a media seminar held at Hotel Taj Samudra this morning  (26)regarding the 2019 International Family planning day Dr.Godakanda has stated that no proper survey had been carried out regarding abortions in Sri Lanka .

However according to a recent survey carried out on six abortion Centers attached to  five Districts it has been revealed that 93.7 percent of those undergone abortions were married women he has revealed .
- September 26, 2019 No comments:

campion Tea Estate in Bagawanthalawa Police Division had been injured and hospitalized due to a Wasp attack this evening (26).

The injured four females and a male who had faced the incident whilst plucking tea leaves in the Estate had been admitted to Bagawanthalawa Provincial Hospital for treatment.

The incident occurred when wasps attached to the Wasps nest
On a Tea plant in the Estate had been provoked .
- September 26, 2019 No comments:

Jayaratne has today (26)ordered the immigration and Emigration Controller General to issue the certified copies of all the documents related to the dial.citizenship  of Former Defense Secretary Gotabaya Rajapakshe to the Criminal Investigations Department.

The court order was issued after considering a motion submitted by CID requesting to issue those documents to carry out the investigations on the National. Identity card and passport related to dual citizenship   of the former Defense Secretary.
- September 26, 2019 No comments:

UNP Has Nominated Minister Sajith Premadasa As It's Presidential Candidate 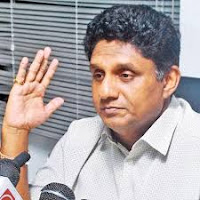 the UNP And Minister of Housing Sajith Premadasa as the Party 's Candidate for the forthcoming Presidential Election.

During the UNP working Committee meeting held at the Party Headquarters "Sirikotha "in pita Kotte today Prime Minister Ranil Wikramasinghe has nominated Sajith Premadasa as the Presidential Candidate of the United National Front which was unanimously approved by the Working Committee members.

Meanwhile Minister Sajith Premadasa is scheduled to  be contested as the Presidential Candidate of United National Front  under the symbol "Swan ".

After the UNP Nominated it's Presidential Candidate party supporters around the Sirikotha have celebrated the news whilst exploding fire crackers .

This Elephant Has 24X7 Security Escort When He Moves