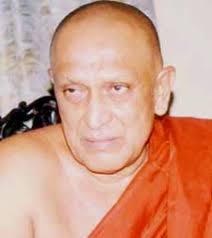 Prime Minister Ranil Wikramasinghe has today (11) said Government has  decided to publish  a Book containing  the Biography Of Late most venerable Maduluwae Sobitha Thero  who  passed away last Sunday.The Book will be also containing the details of Venerable Sobitha Thero's  service to the nation.

The Government has planned to publish the book soon and distributing it to all Schools and Libraries in the country from next year.

Meanwhile the Government has today (10) decided to submit a cabinet paper to the Cabinet to conduct Venerable Sobitha Thero's Funeral with full state honors and the Ministry Of Home Affairs is due to bear all costs of the Funeral Government has said.

The Funeral Of Late Sobitha Thro is scheduled to be held at Parliamentary Ground in Colombo on this Thursday(12).

The Attorney General Department is due to file applications at Courts Tomorrow(11) in view of releasing around 31  suspects arrested under the Prevention Of Terrorism Act according to Commissioner General of Prisons Rohana Pushpakumara.

Over 200 Tamil Prisoners in Several Jails around the Country have commenced  a hunger strike recently  to protest against being in jails for years  without a trial.However after President Maithripala Sirisene has intervened and assured their grievances will be addressed soon the prisoners ended their hunger strike.

By considering the Tamil Prisoners demand ,The President Maithripala Sirisena,Prime Minister Ranil Wikramasinghe and Attorney General have  taken a decision after holding several rounds of discussions to release these prisoners who are being in jails for years without a trial.

Sri Lanka Medical Association(SLMA) has decided to discuss with National Chamber Of Commerce regarding how to avoid   using  small children for  the Media Advertisements made by Private Food Companies related to  Food Items.

It has been revealed Media Advertisements related to Fast Food Items made by using small children can affect other children's health in bad way.Due to the advertisements made for food items like  Margarines,Pizzas,Burgers ,Processed Meat like Sausages by using small children ,the consumption of such food items by local  children  have  increased significantly Sri Lanka Medical Association has said.

According to the recently conducted medical survey Obesity and Diabetes among Small Children in the country are on increase and one of the  main causes behind this situation is Fast Food Advertisements made by using small children  to attract the child Population Medical Association has said.
- November 10, 2015 No comments: