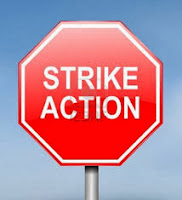 According Mr.Stalin the court restraining order issued by Colombo District Court yesterday was clearly a government sponsored one to destroy trade unions right to  strike .the 45 trade union member Trade Unions Collective has also decided to complaint on this international organizations in coming days he has stressed.

Addressing a Press Briefing held at State Staff Union Office in Colombo-03 this evening Mr.Stalin who is also the Secretary of Ceylon Teachers Union has said that launching a strike to win demands is a right attach to trade unions and no one can challenge that right.'if the authorities are trying to challenge that right it's a clear violation of Trade Unions Act" he has further added.

Meanwhile the Two Day island wide strike launched by PSM's ,Para Medical Officers and Nurses has continued to it's second day today and hospital services including issuing of drugs and injections in OPD'S,Radiography Tests,Laboratory Tests,Physiotherapy Tests have stooped due to the strike.the strike is scheduled to be stopped 7 a.m tomorrow morning.