The Executive Committee of the Government Medical Officers Association (GMOA) which was summoned an emergency meeting two hours ago has decided to launch a 4 hour Island Wide Token Strike of Government Hospital Doctors   between 8 A.M to 12 Noon tomorrow (05) to protest against the assaulting of   secretary to the Sri Lanka Medical Council (SLMC) Dr,N.J Nonis this afternoon.

A spokesman of the GMOA has said that  the Doctors attached to Lady Ridgway Children's Hospital,Maharagama Cancer Hospital,Castle Street Maternity and De Soyza Maternity Hospitals in Colombo will not participate this Island Wide Strike due to humanitarian reasons.

Due to this Strike OPD Clinics of the Government Hospitals and routine surgeries and treatment will become stand still tomorrow  and   Emergency Services of  rest of the Hospitals will be maintained as usual during the strike  period  the spokesman has  stressed.
- October 04, 2011 No comments: 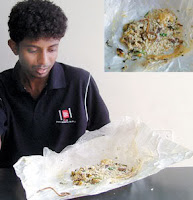 The Public Health Department of  Colombo Urban Council has rejected to grant registration  to 205 Rice Pack Manufacturers in Colombo City due to the unhygienic way of preparing their rice packs according to the Colombo Chief MOH Dr.Preadeep Kariyawasam.As the deadline given for registering of Rice Pack Manufactures in Colombo already has passed the Public Health Department only able to registered 110 Rice Manufacturers who met the standards required for Rice Packing he said.

The given deadline for applying for registering the Rice Packs is 30th of September this year and the Department has received 315 applications he stressed.Those who have received the registration should carry the Registration Seal provided for them with the Name,Address of the manufacturer ,The Date and Time of packing and the registration number Dr.Kariyawasam has stressed."The Rice Pack Manufacturers are advised to sell the Rice Packs only 4 hours since the packing time and those who do not meet  these rules will face legal or other stern action he further added.

The Officials of the Central Food Control Unit belongs to the Colombo Public Health Department began raids today targeting those who are violated Rice Packing laws.
- October 04, 2011 No comments:

By adding fuel to the present crisis on harassment against Medical Officers the secretary of the Sri Lanka Medical Council (SLMC) Dr.N.J Nonis was assaulted by two unknown persons this eve near his residence at Rawatawatte,Moratuwa in the Colombo Suburbs according to the Government Medical Officers Association (GMOA).

The Assistant Secretary of  GMOA Dr.Upul Gunasekera has said today that an emergency meeting of the Executive Committee will be summoned at GMOA Headquarters in Colombo tomorrow (05)at 10 a.m to discuss the future action to be taken regarding the assault of  SLMC Secretary.
- October 04, 2011 No comments: