Mr.Hemasiri Fernando Has been appointed as the Vice President of the Asian Olympic Council during it's Annual General Meeting held in Tokyo,Japan today.He was elected to the post uncontested.

He is also the current Chairman Of the National Olympic Committee and  Vice President of the Commonwealth Olympic Federation.
- July 15, 2011 No comments:

The Police has arrested an Estate Superintendent  this eve with connection for  the murder of former Cinema Actress Vinu Wettamuni.The said Actress was murdered by an unidentified person  February this year.

The Police also found a deeds belongs to the Actress from the Suspects House and suspects that a land issue may have been the cause of her death. 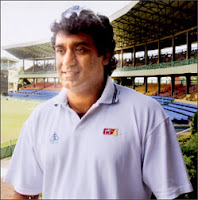 Former Sri Lankan All Rounder Romesh Ratnayake has been appointed as the New Sri Lankan Cricket Coach for the forthcoming Tour to Australia.He will full fill the Vacancy created by Australian Coach Stuart Law who was the  Coach for Sri Lankan Team's  recently concluded England Tour.

Law has left the team to takeover the Coaching of Bangladeshi National Cricket Team.
- July 15, 2011 No comments: