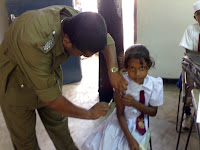 Under this trade union action PHI's are due to boycott the attending of Dengue Control Activities and island wide raids as well according to the union."As Ministry of Health has failed to keep their promise on giving solutions for PHI's demands by 19th of April with the help of Finance Ministry we have no other option other than resorting to a  continuous trade union action"a Spokesman for the  Public Health Inspectors Union has said.

PHI's are demanding a Rs.15,000 Uniform Allowance,Fuel Allowance and Office Allowance for their profession.

Erythroprotein Injection Out Of Stock In Government Hospitals "Erythroprotein "Injection recommended for treating Kidney related Anemia is out of stock in both Government Hospitals and Medical Supplies Division (MSD) these days according to Hospital Sources.This Injection was out of stock in Government Hospitals since one and half months and Kidney Patients who are prescribed this injection are severely affected due to this it has been reported.

One Injection vial of "Erythroprotein " costs  around Rs.3400 and above when buying in Private Pharmacies according to sources.