THOUGHT FOR YOUR LIFE FROM BUDDHISM ( SOURCE-METTA SITE) 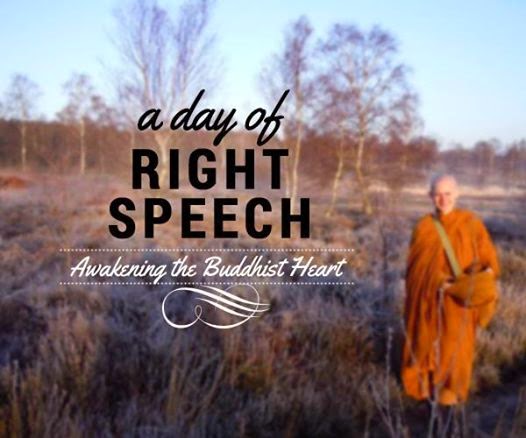 We can use words skillfully or unskillfully; we can use words to heal or to hurt. As Buddhists, our intention is to help, not harm. Perhaps it would really help all of us, if, before we speak, we could stop for just a moment to make certain that what we are about to say accurately reflects our heart's intentions.

A DAY OF RIGHT SPEECH - A HEALING PRACTICE

Why not choose a day that will be devoted to using your words to fulfill your highest spiritual aspirations? May this day of Right Speech bring gentle blessings to those around us and may the blessings extend throughout the world.

Here are some suggestions for things you can do:

— Start the day with a heartfelt aspiration that reaffirms your intention to always speak with compassion and love.

— Center and collect yourself each time you speak. Be mindful of all your words. Even if you want to say something as banal as "please pass the pol sambol," be conscious of your tone of voice, and whether you are saying what you really want to say.

— Find ways to keep your words gentle, loving, accurate, and positive. Do this even if you're annoyed and upset.

— See if you can discover better ways to talk to others that will open up new channels of communication.

— Don't lie and don't use words to manipulate or control others.

— Don't say anything about anyone that you wouldn't say if that person were present.

— Use your words to encourage those around you.

— Don't chatter; don't use words just to fill empty spaces with noise. Don't become nervous about the absence of speech; allow yourself and others to be silent.

— Don't interrupt others; let the people round you finish their sentences and express their thoughts.

— Use your words to express gentleness and kindness.

— Try to make at least one person feel better because of something you say.

— Use your words to convey friendship, encouragement, and support.

— Try to phone and connect with at least one loved one with whom you have lost touch.

A day of right speech can only help your kamma.

Keep up the good word!

All government schools are to be closed during 07th  to 09th of January 2015 in view of the upcoming presidential elections the government has announced today(03).In addition around 43 schools in Colombo District are scheduled to be closed from 11th to 15 th of January due to the Sri Lankan visit of Pope Francis.

Due to the GCE Ordinary Level Examination the third term school season is scheduled to be started from 05th of December.