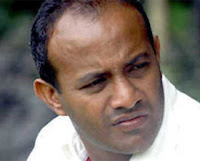 Former Sri Lankan Cricket Captain Hashan Thilakaratne who is also a member of the Western Provincial Council has requested   a protection from the CID for his family ,if he is to name the people in  local cricket scene  who were involved in Match Fixing.It has learn t that Hashan has told the CID while he was questioning today for the second time on his claims to give a protection for his family.

There were some death threats received by him and therefore he asked  a protection to revealed the names of the people who were involved in match fixing as an eye witness according to the sources.He was questioned by the CID on last Tuesday as well after the Sports Minister Mahindananda Aluthgamage has ordered the IGP Mahinda Balasuriya to probe in to allegations made by Hashan.Hashan claimed that the match fixing is spreading like a cancer in the local cricket scene since 1992 .
- May 06, 2011 No comments:

Government To Supply Fertilizer Subsidy For All Crops

The Government has decided to supply fertilizer subsidy for all crops with effect from midnight tonight the secretary of the Ministry Of Coconut Development has announced today.
- May 06, 2011 No comments:

Government To Provide Concessions To The Electricity Bills Issued During Last March ,April And May

Government has decided to grant concessions for the Electricity bills of the consumers for the months of March,April and May where an is...