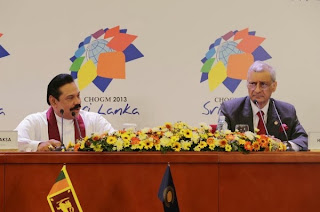 As postwar reconciliation process in the country  has already began, Sri Lanka will not bow to any International Pressure like British Premier has stated and would complete it's own inquiries in it's own time Sri Lankan president Mahinda Rajapaksha has said this evening.president has also requested British Prime Minister David Cameron not to dictate him as he is  not ready to take orders from others.

Addressing a press briefing at BMICH this evening after conclusion of three day Commonwealth Heads Of Government Meeting Sri Lnakan President has said that as a country which has 2500 year old culture and legal system Sri Lanka is having a law enforcement process to address any issue.

Responding to the British Premier's comment on giving Sri Lanka till next march to establish a credible mechanism to investigate on alleged war crimes president has stressed that is not something a country can do overnight and therefor they should respect  our own views without pushing us in to a corner ."The postwar reconciliation process is not something one can start today and finished tomorrow.it has to built slowly " he said.

President has also urged the international community especially the foreign media personal "to be fair" and help Sri Lanka without dividing communities.
- November 17, 2013 No comments: 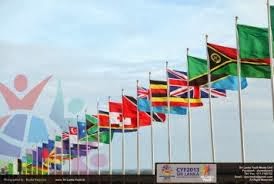 The Commonwealth Heads Of Government meet yesterday(16) in Colombo have pay much attention to the problems related to Youth sources said.the leaders have mainly discussed on unemployment,quality education system and generating of employment for youth sources added.

Meanwhile the third and final executive meeting of commonwealth heads of government are currently underway in BMICH, Colombo.a get together of heads of states held this morning.

Today is the final day of the CHOGM -2013 and commonwealth leaders are expecting to prepare a final report based on the discussions they had during last three days of the meeting .the final reports of commonwealth youth,peoples and business forums as well as the report made by commonwealth foreign ministers will also taken in to consideration.

The press briefing to announce the decisions made at commonwealth meeting will be held this evening at BMICH and the new chairman of CHOGM and Sri Lankan President Mahinda Rajapaksha and Commonwealth Secretary Kamalesh Sharma are due to address this briefing.

Malta To Host The Next Commonwealth Heads Of Government Meeting

The Commonwealth Heads Of Government who meet in Colombo today(17) have unanimously selected Malta  to host the next Commonwealth Heads Of Government Meeting (CHOGM)in 2015 after the expected host Mauritius Islands withdraw from hosting it.the prime minister of Malta Dr.Joseph Muscat was also there at the meeting when this decision has been taken according to reports.

Malta was also hosted the Commonwealth Meeting in 2005.Mauritius Islands which expected to host the event in 2015 has withdrawn from hosting it after their Prime Minister Navinchandra Ramgoolam has boycotted the Colombo Summit .