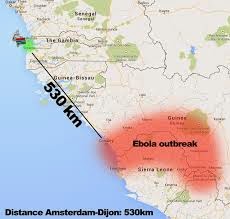 The Foreign Employment Bureau Of Sri Lanka has decided to bring back around 200 Sri Lankan Workers in Liberia to Sri Lanka with immediate effect due to the outbreak of deadly Ebola Virus in some of the western African States including Liberia.

The Employment Bureau had already suspended the sending of Sri Lankan workers there while take in to consideration the spreading of ebola virus  and also urged the relatives of those who  work in Liberia   to inform them to return to Sri Lanka .

According to the World Health Organization(WHO) 1779 People in four west African countries namely Liberia, Nigeria,Guniea and Sierra Lione have been affected with Ebola Virus as at  08th of August while 961 have died from the disease already.During 05th and 06th of August ,29 Ebola deaths have been reported from these countries it has been revealed.

The Description Of Ebola Virus by the World Health Organization

Ebola virus disease (formerly known as Ebola haemorrhagic fever) is a severe, often fatal illness, with a case fatality rate of up to 90%. It is one of the world’s most virulent diseases.The infection is transmitted by direct contact with the blood, body fluids and tissues of infected animals or people. Severely ill patients require intensive supportive care. During an outbreak, those at higher risk of infection are health workers, family members and others in close contact with sick people and deceased patients.

Ebola virus disease outbreaks can devastate families and communities, but the infection can be controlled through the use of recommended protective measures in clinics and hospitals, at community gatherings, or at home.