The Radiographers attach to Government Hospitals in Western Province are to be launched a four hour walk out from 8 a.m to 12 noon on this Wednesday by demanding solutions for six of their service demands.according to Government Radiography Technologists Union during the four hour walk out on this Wednesday only emergency services will be maintained while routine tests carryout in government hospitals of western province will be cancelled.

If the authorities are not able to give solutions for their service demands during this week the Radiographers attach to government hospitals island wide will be launched a one day sick note campaign on 26th of this month the Radiography Technologists Union has said.
- January 20, 2014 No comments: 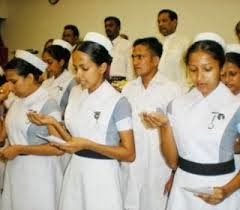 The Public Services Nurses Union (PSNU) has today charged that the real reason behind  the opposition of Government Medical Officers Association(GMOA) to the Midwifery Training given to Nurses is none other then   blocking  Nurses from obtaining university degrees .speaking at a press briefing held at PSNU Headquarters in Abayaramaya Temple in Colombo today(20)a senior nursing officer attach to PSNU Mrs.Amitha Padmakumara has said that GMOA is using Midwives as a weapon to prevent the midwifery training of nurses and they have no right to do that as midwifery training has given to nurses way back from 1886.

"Midwives should have realized that the GMOA is showing their support to them  in this issue for their own benefit and not because they really love midwives" she has stressed.
- January 20, 2014 No comments: