The Muslim Community of Sri Lanka and around the world have  celebrated "Eid-Ul-Fitr"today after ending the fasting month of Ramadan.As the new moon has been sighted in Thoppur in Trincomalee yesterday (30) the Colombo Grand Mosque has announced that the Eid Ul Fitr will be celebrate today.

I WISH ALL OF MY BLOG READERS WHO ARE CELEBRATING RAMADAN A VERY HAPPY AND PROSPEROUS "EID-UL-FITR".
- August 31, 2011 No comments:

Water Levels Drastically Reduced At Kotmale Due To Dry Weather 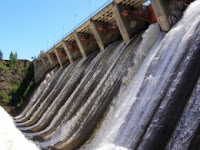 The Water Levels of many reservoirs throughout the Island have reported as drastically reduced due to the dry weather conditions prevails in  hill country  including the areas surrounding Water Tanks.

According to the Engineers the Water Levels at Kotmale have reduced to 24% which has caused the reducing of water level used to generating power by 13%.The Engineers said that the Kotmale Power Plant has generated 455 Million Units of Power each year and the current level of Water there only be sufficient to generate power for ten days.
- August 31, 2011 1 comment: