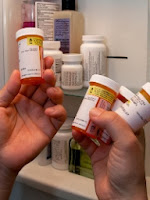 The Forum Of Health Professionals Against Government Corruption has decided to take legal action against a corrupted local agent company of  an Indian Drug Manufacturer which is responsible for importing low quality drugs and drugs with serious side effects to the country according to Forum Sources.

The said corrupted local drug agent company has responsible for the death of a child who was admitted to Karapitiya Teaching Hospital recently for drug poisoning and making ill so many other patients who have taken their drugs the Forum has said.the corrupted local company has black listed last year(2012) as well as in early 2013 for importing low quality drugs and  drugs with serious side effects  to Sri Lanka but in recent weeks their name was removed from the black list and given registration in National Drug Authority withing a short period of time to import same sub standard drugs which banned earlier Forum Of Health Professionals Against Government Corruption has revealed.

"As Health Ministry has turned blind eye on taking a action against the said corrupted local drug agent we have no other option then taking legal action against the company in view of safeguarding the lives of patients" a spokesman of the forum has stressed.