Three Cardiac Thoracic Surgeons Have Resigned From The Govt.Sector To Join Private Sector 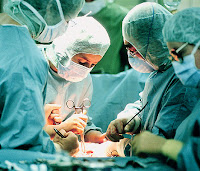 One of the popular Cardiac Thoracic Surgeons who was among the group of surgeons  joined private sector recently has received around Rs.15,000,000 as his monthly salary from the Private Hospital he is currently attached with Dr.Soyza has revealed.

Around Rs.1.5 million has spend by the government for specialist training of a medical officer according Ministry Of Health.