Channel-4 T.V Crew Has Abandoned Their Journey To Northern Sri Lanka After Protestors Blocked Their Train In Half Way 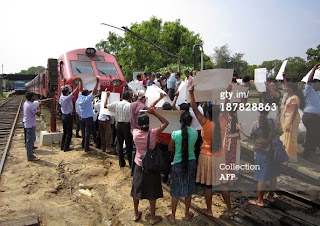 The visiting Six  member T.V crew of  Channel-4 T.V in Britain including the  controversial Journalist  Callum Macrae has sent back to Colombo by a special van this morning after the train they were traveled in to heart of Northern Province Kilinochchi was blocked by a group of protestors at Anuradhapura City(North Central Province) .

When the train reached Anuradhapura City, hundreds of protestors were sat on the rail way track and refused to allow the train which carrying hundreds of other passengers as well to continue their journey according to sources.the channel-4 t.v crew including their editor Ben de pear have stuck in Anuradhapura around two hours before abandoned their journey to kilinochchi and returned Colombo sources have added.

After allowing them to cover the Commonwealth Heads Of Government Meeting scheduled to be held in Colombo from 15th to 17th of this month Channel-4 T.V crew including  Callum Macrae arrived Colombo yesterday(12) .they have catch an early morning train today to go to kilinochchi and after reached Anuradhapura City they have faced this incident.

Although the police officers have intervened in the incident the protestors who were blocked the rail track have repeatedly requested the Channel-4 team to return to Colombo.protestors have also accused the t.v crew for  taking funds from the defeated local terrorist group LTTE and  making controversial documentaries against Sri Lanka.

As Sri Lankan Government as well as the president mahinda rajapaksha repeatedly promised the invited guests for the commonwealth summit will have free access too all parts of the country channel-4 t.v crew has informed the incident to president's office and to the British High Commission in Colombo.

The Sri Lankan government has earlier announced  that all protests were  banned in run up to the commonwealth summit.
- November 13, 2013 No comments: