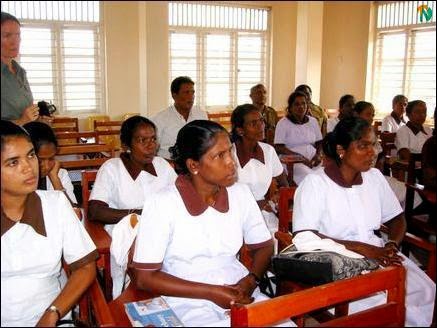 The Government Midwives Union has decided to extend their current trade union action launched against Midwifery Training of nurses  to a death unto fast campaign withing  next few days according to union sources.

Around 720 Midwives have been voluntarily to participate this death unto fast campaign due to be held in Colombo the president of Government Midwives Union Mrs.Devika Kodituwakku has said.

Around 12,000 government Midwives are in  a continuous island wide strike since last Wednesday (02) by demanding Health Ministry to abolish it's  decision to  allow all government nurses to get midwifery training .due to this strike the Maternity and infant clinics in MOH Offices and child delivery services in maternity hospitals have paralyzed according to health sources.

The Sri Lankan National Cricketers who brought glory to their motherland by winning T20 World Cup 2014 yesterday are due to arrive Sri Lanka tomorrow(08) evening.the Cricketers are scheduled to be arrived Katunayake International Air Port at 4 p.m in the evening and after conducting a special media briefing for local and international Journalists they will be taken to Sri Lanka Cricket Board through a public parade cricket sources said.

The T20 Champion Cricket Team is due to travel in open vehicle according to sources.a series of receptions are due to be held on behalf of the cricket team.