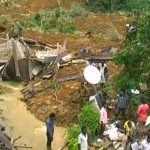 The Disaster Management Minister Mahinda Amaraweera has said this evening that 150 family members,75 adults and 75 school children  out of the 300 people went missing due to the land slide in Meeriyabadda Estate in Haldummala ,Badulla have been saved their lives as they were in their work places and schools at the the time when the incident occurred.Around 150 family members that stayed at their line rooms(houses) were trapped due to the land slide and they are believed to be under the rubble the Minister has  stressed.

Now the number of people who found dead due to the land slide risen to eight.

Around two kilo meter area where the houses were has been vanished due to the pieces of rock fell to the houses.Two government Quarters located at Haldummala area also destroyed due to the land slide it has been reported,Rescue mission carrying out by the Police and Air Force has been still under way to save the lives of those who were trapped under the rubble.

Meanwhile if the rains continue further in the  area  the resuce mission will be badly affected the Disaster Management Center ha said.
- October 29, 2014 No comments:

Around six people have confirmed as died and another three hundred people have went missing due to  a land slide occurred in mountainous area in Meeriyabaddewatta- Haldummulla at ,Badula District  at 7.30 a.m  this morning.

According to the Disaster Management Center around 150 families lived in the area which the land slide has occurred and 120 in line houses were destroyed due to the disaster.It has been reported that most of the people went missing due to the land slide are buried under the rubble.

The rescue efforts have currently underway.Due to the continuous rain fall experienced in  the area during last few days this situation occurred DMC has said.Around 500 soldiers are currently engaged in rescue efforts.

LETS PRAY THAT  THESE INNOCENT PEOPLE WILL BE RESCUED.
- October 29, 2014 No comments: