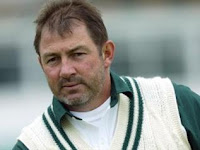 The Sri Lankan New Head Coach is due to assume his duties from  27th of September(Tuesday).

He is an Australian Level 3 qualified Coach and coached the Zimbabwe National Cricket Team during 2000-2004 . Later he served as  a National Cricket Selector for Cricket Australia.
- September 23, 2011 No comments: