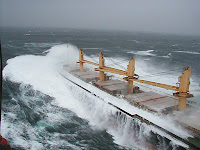 The Meteorology Department has advised local fishermen today to beware of the rough seas with strong winds at seas in Trincomalee,Batticloe,Ampara ,Hambanthota,Galle and Matara.

Heavy Showers were experienced in most parts of the country today assisted with some strong winds.
- November 30, 2011 No comments:

The Second Reading of the 2012 Budget Proposals was passed at the Parliament this evening with a majority of 91 votes.During the vote 151 MP's voted in favor of the Budget while 60 MP's voted against it.
- November 30, 2011 No comments:

The Rock Situated At Entrance Channal Of Hambanthota Harbor Was Blasted

The Rock situated at the entering channel of newly constructed Hambanthota International  Harbor(Southern Province) was blasted at a cost of US Dollars 35-40 million and now the pieces of blasted rock are being removed from the area according to the Harbor spokesman.The blasted rock was prevented  berthing of large ships at the Harbor.

The Harbor Officials are expecting to clear the operations on removing  rock pieces withing three weeks time enabling larger ships,container carriers and mammoth oil tankers to enter the Hambanthota Harbor.The rock was blasted by China Engineering Company.The main opposition parties have revealed for the first time last year that there was a rock at  Hambanthota Harbor which prevents the entering of Ships to Harbor.
- November 30, 2011 No comments: 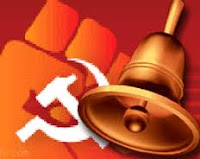 The Police used tear gas and water canon to dispersed a group of Leftist JVP (Janatha Wimukthi Peramuna) Supporters belongs to Socialists Youth Union who gathered at  Lake House Roundabout when they tried to  marched to wards the Ministry Of Finance .The protestors were marched to opposed the Budget Proposals and demanding job opportunities for an unemployed graduates while carrying some placards  with them.


The protestors have exchanged stones with  Police as they were prevented by  entering the Ministry.
- November 30, 2011 No comments:

Earlier in the day MP Grero has stated during his special speech that Government's Budget Proposals for 2012 was a positive one and he wants to help Sri Lankan Education System through voting in favor of the Budget Proposals.Soon after he made his statement on supporting Government's Budget President Mahinda Rajapaksha has met the controversial Opposition MP in  Parliament this evening it has been reported.
- November 30, 2011 No comments: