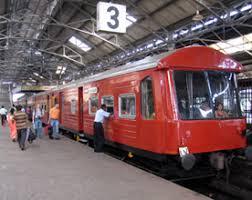 The Railway Trade Unions have decided to called off the 48 hour Railway Strike  scheduled to be launched midnight today(28) following  discussions they had with transport authorities this morning.around 3000 railway workers including drivers,formans,station masters ,railway guards and signal controllers were to take part in this strike demanding a pay hike.

The Railways Professional Trade Union Alliance has today decided to suspend the strike following the discussions held with the secretary to Transport Ministry Dhammika Perera.