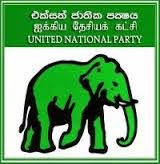 Former General Secretary of the United National Party(UNP) and Health Minister MP Tissa Attanayake had been  arrested by the Colombo Crimes Division this morning in Colombo for creating a fraud document with fake signatures of Current President Maithripala Siirsena and Prime Minister Ranil Wikramasinha during the election campaign of the Presidential Elections.

After produced before the Colombo Fort Magistrate MP Attanayake was ordered to be remanded till 11th of February per the request made by Colombo Crimes Division Officers.