Thia action is taken to prevent errant traders from increasing the Prices of these Consumer Goods on their own Interests.
- April 08, 2009 No comments:

Loud Explosions Heard From No War Zone After The Army Announcement 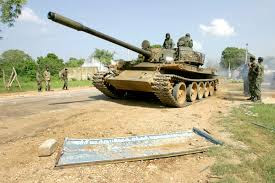 According to the Sri Lankan Defence Ministry some loud explosions were heard this evening from the No War Zone in the Northern Sri Lanka after Army made the final announcement through Loud Speakers for the LTTE leader Valupillai Prabhakaran to surrender and let the Civilians free .

Defense Officials believed that it may be some sort of attack launched by the LTTE against the Civilians who are tried to escape from the territory.

LTTE Rebels held large number of civilians under their control within the No War Zone and it is the only remaining area in the North Ground Forces need to liberate now.Forces captured entire Puthukkuduyirippu Area the final rebel stronghold last Sunday restricting Rebels to the No War Zone.