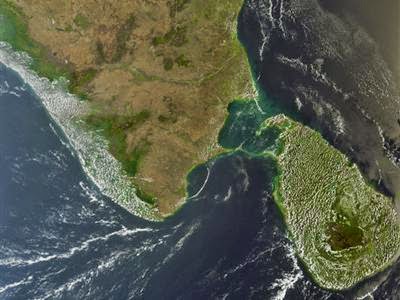 Sri Lankan Navy has last night arrested 29 Indian Fishermen who were illegally fishing in Sri Lankan waters of the north western coast of Talaimannar .the fishermen along with their trawlers were arrested and they are due to be handed over to the fisheries authorities in Talaimannar for legal action according to navy sources.

The navy has said that the arrested Indian Fishermen from Tamil Nadu have clearly violated the International Maritime Boundary Line by  using an  illegal method of fishing the bottom trawling in Sri Lankan waters.earlier Sri Lankan Government has announced that the Indian Government has agreed to phase out the destructive methods of fishing like  bottom trawling in waters between Sri Lankan and India.
- June 01, 2014 No comments:

The Trains started from Colombo Fort and Maradana Rail Way Stations have got delayed this evening due to the lightning disrupting  the signal systems.

Meanwhile several roads in Colombo including Thunmulla Junction,Bauddaloka  Mawatha and R.A De Mel Mawatha are inundated at the moment due to the heavy showers prevails in Colombo since few hours.a heavy traffic is there due to this situation it has been reported.
- June 01, 2014 No comments: