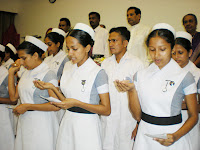 The Public Services Nurses Union (PSNU) has made a written request to the Ministry Of Health to extend the retiring age of Nurses to 63 years and to recruit the retired government nurses to  hospitals as a solution for the nurses shortage faced by government hospitals.

The President of the PSNU Ven.Muruththettuwe Ananda Thero has said as more and more new wards and new units including theaters and intensive care units attached to government hospitals are open there's only 25,000 nurses are available to cater the needs of patient care in the hospitals while the hospitals needed around 45,000 Nurses to fill the shortage.

Due to the severe Nurses Shortage in the Country Nurses attached to the special units like Theaters and Intensive Care Units need to work  12 to 18  hours per day and as a result  not able to cater their personal needs Muruthettuwe Thero has stressed."If the Ministry Of Health is not accepting the Nurses Unions proposals on  filling  the shortage of nurses the Union will refused to recruit the current batch of nurses to any of the newly built government hospital units he has revealed.

The next batch of trained nurses are due to passed out in the year 2014 and at least till then the Health Ministry should have implemented the Nurses Union 's proposals the President of the Union has stressed.
- October 26, 2011 No comments: