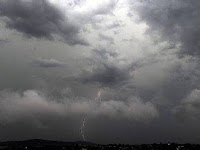 According to the Disaster Management Center the death toll due to the Adverse Weather Condition prevails in the Country has risen to 6 while nearly 4000 people and more than 1000 families have affected due to floods in several parts of the country.

According to the Center 5 people were died due to heavy showers and land slides in Galigamuwa area in Kegalla District and One person died due to lightning in Millaniya of Kalutara District.Kegalle District has  identified as the District worst affected by floods.

Meanwhile Few earth slips occurred in several areas in the Country today causing heavy traffic .The water level of  one of the main rivers in the Country the Kelani River too has risen to minor flood level and the Irrigation Department warned the residents in Kelani River Basin to be in alert on the situation.
- May 28, 2011 No comments: