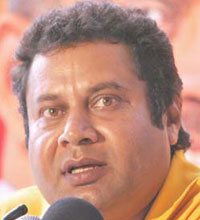 The Democratic National Alliance (DNA) today has  nominated their member Mr.Jayantha Katagoda to fill the vacant parliamentary seat of the DNA leader Retired General Sarath Fonseka who is now in prison.This decision was taken unanimously during the DNA Party meeting held today(05th) according to the Party Sources.

In previous occasion the member of the DNA Party Lakshaman Nipunaarachchi who received the second highest number of preferential votes after General Fonseka at the parliament elections for the Colombo District was named to fill the  Vacant Parliamentary seat of General however he refused to accept the offer even though his name was gazetted as the replacement.

According to the DNA even newly replaced Mr.Katagoda who received the third highest preferential votes for Colombo District refused to accept the offer the Part has unanimously decided that he should accept it.DNA also stated although the vacant parliamentary seat of General Fonseka filled with another one the party still believes the seat is belongs to General Fonseka who secured highest number of preferential votes for Colombo District during last parliamentary elections.Newly appointed Mr.Katagoda is scheduled to be sworn in as a MP before the Speaker on 08th of March.
- March 05, 2011 No comments:

Sri Lanka Vs Australia Match Was Abandoned Due To Heavy Showers 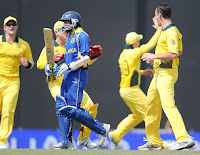 The ICC World Cup Cricket Match played between Sri Lanka and Australia which under way at the R.Premadasa International Cricket Stadium in Colombo was abandoned due to heavy showers fell to the grounds this evening and both the teams awarded one point each as the match ended with no result.

At the time when  the match was stopped Sri Lanka who elected to bat first after winning the toss  scored 146 runs for the loss of 3 wickets in 32.5 overs with Skipper Kumar Sanagakkara 73 not out and Thilan Samaraweera 34 not out.

After elected to bat first  in a pitch favorable for batting Sri Lanka was badly placed when they lost their two openers Thilakaratne Dilshan and Upul Tharanga for low scores.Former skipper Mahela Jayawardena's was run out at a time when he and skipper sangakakra tried to accelerate the Sri Lankan Scoreboard.However after Mahela's run out All Rounder Thilan Samaraweera joined with Sangakkara and put a valuable partnership to taken the Sri Lanka's score to 146 till  rain interrupted the play.

The Match which is a day night match declared as abandoned after the two referees inspected the pitch and the rainy condition .Due to the two teams awarded with one point each Both Sri Lanka and Australia now having 5 points each as Sri Lanka placed 2nd in their group "A" and the Aussies placed 3rd in the group.

Sri Lankan Skipper Kumar Sangakkara won the toss and decided to bat first against Australia short while ago.The match 20th ODI Match of the ICC World Cup is due to commence in few minutes time at the R,Premadasa International Cricket Stadium in Colombo.


A packed crowd are there in the stadium right now to witness the Sri Lanka vs Australia Match which is a repeat of the Last World Cup Final in 2007.
- March 05, 2011 No comments: