An Elephant Was Killed After Hit At Train In Kekirawa 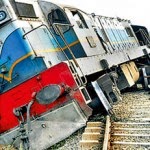 A train runs from Trincomalee to Colombo was derailed late  last night after it was
hit at wild elephant in Kekirawa(North Central Province) according to Railways Department.the wild elephant was killed due to the accident and no one in the train has injured the sources revealed.

Due to this accident train services in the line got delayed around eight hours and brought to normal early this morning.however four trains got delayed due to the accident railways department has said.

According to  the authorities around 200 elephants have been killed last  year due to the  human -elephant conflict.
- July 05, 2014 No comments: