The  Government Hospital nurses will launch a massive protest campaign  If the Health Ministry  agrees to take  a decision against the midwifery training of Nurses during the discussions scheduled to be held with Government Midwives Union tomorrow(17),   the president of the Government Nursing Officers Union Saman Rathnapriya has said.

"It is unfair that the Ministry Of Health has invited only  the government Midwives Union for the talks on Midwifery Issue without inviting Nurses Unions "Ratnapriya has stressed.

The new Health Ministry Secretary Mrs.Sudharama Karunaratne has invited the Government Midwives Union Officials to the ministry to discuss on Midwifery Training Issue Crisis occurred between Nurses and Midwives in government hospitals per the request of Health Minister he has revealed.
- June 16, 2014 No comments: 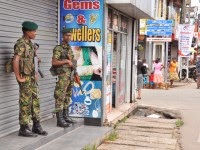 The reliable sources  revealed that few people died and around 80 injured due to the clashes occurred yesterday(15)between two religious groups in Beruwala and Aluthgama areas.the injured were admitted to the Kalutara Hospital and some are still receiving treatment including a Buddhist Monk hospitals sources have said.

Dozens of shops in Beruwala and Aluthagma too burnt during the clashes it has been revealed.

Meanwhile addressing a media briefing held in Colombo Today(16) the secretary to the Ministry Of Law and Order Retired Major General Nanda Mallawaarachchi has said the tense situation in the said areas now returned to normalcy.he has also appealed to the public in those areas to be calm.

The leftist Janatha Wimukthi Peramuna(JVP)has today appealed from the people to halt all religious clashes and help to build a peaceful environment in the country.

Due to the clashes occurred between two religious groups, police curfew has been imposed in Beruwala And Aluthgama areas since yesterday to control the situation.Police Special Task Force Has deployed in the areas to strengthen security.