A Businessman Who Was Carried Rs.4.5 Million Worth Gold Slabs Inside His Rectum Got Arrested 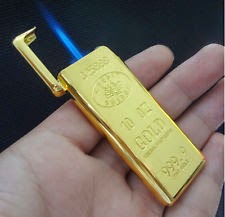 The Revenue Task Force (RTF) Officers at the Katunayake Bandaranayake International Air Port   have arrested  a Sri Lankan Businessman  who was  carried nine pieces of Gold Slabs weighing over 900 grammes  hidden   inside  his rectum this afternoon.

The Businessman who arrived here from Singapore around 11.45 a.m was carried these gold slabs worth Rs.4.5 million inside two parcels which stored inside his rectum officials have said.As the officers belongs to the Revenue Task Force have checked the said businessman for suspected behavior  he was pleaded not guilty till the x ray tests confirmed  that their were thin gold bars stored inside his rectum.

The way the said businessman carried the gold slabs is considered as a very dangerous method of smuggling gold to a country RTF Officers said.The further investigations on the matter are being carried out by the RTF.
- September 25, 2014 No comments: