Opposition Leader Pledged His Party's Support Towards The Govt.To Find A Political Solution For The National Issue 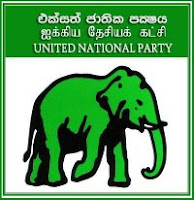 The Opposition Leader Ranil Wickramasinha has today said that his party the United National Party(UNP)  is ready to support the government to find a political solution to the national issue and to ease the  International Pressure on the Country.

A Popular Actor in Sri Lankan Cinema (Sinhala Cinema)during 1950's and 60's Veteran Stanley Perera has passed away  this evening at the Colombo residence of her eldest daughter Popular Actress Sabeeta Perera.

The late Stanley Perera made his debut as an Actor in 1952 when he was selected to act in the film"Kala Handa(Wild Moon) based on a Popular N oval written by W.A Silva at the age of 17.He became very Popular for his role of John Jayapala in the film which he acted with the Nightingale of Sinhalese Cinema Late Rukmani Devi.Amongst other Popular Films he acted are "Duppathage Duka(The Sorrow of Poor Person),"Chandali"( A female belongs to a low cast),"Akka Nago(Sisters) ,London Hamu and Hathara Maha Nidhanaya.

He was married to the Popular Actress in 1960's Girly Perera(Nee Gunawardena).The remains of the late Actor now lies in the Jayaratna Funeral Parlour in Borella.
- July 10, 2011 No comments: