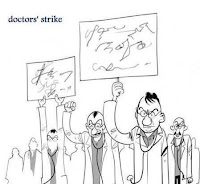 All Doctors attached to Colombo National Hospital has decided to launch a one day token strike from 8 a.m tomorrow(01) to 8 a.m on Saturday (02) by demanding solutions for  two demands.

Around 1000 doctors attached to Colombo National Hospital launching this strike by demanding correcting irregularities of  annual transfer list of doctors and suspending orders given by health secretary Dr.Nihal Jayathiake to release around 450 doctors based on out dated 2012 annual transfer list according to Colombo national  hospital branch of Government Medical Officers Association(GMOA)all  OPD (Out Door Patients Department) clinical treatment as well as  routine surgeries and treatment will not be performed during strike period while emergencies will be performed as usual branch union officials said.

If the solutions for two demands not given withing next two days national hospital doctors will launch a continuous strike from coming Monday(04) officials further added.

The Supreme Court today(28) has suggests Health Ministry and Ceylon Tobacco Corporation to settle health warning issue by reducing the size of health warning pictures proposed to be appeared in Cigarette Packs.Court has given both parties to settle this matter till 28th of March.

Tobacco Company has  filed a case against Health Ministry opposing the printing of health warning pictures in cigarette packs which earlier rejected by appeals court.