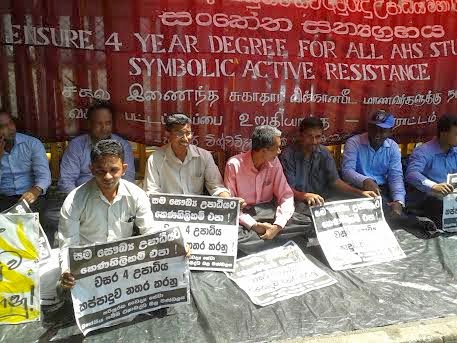 Around 300 Professions Supplementary To Medicine(PSM'S) have staged a one hour "Satyagraha" campaign in front of the Health Ministry this noon and then moved to the nearby University Grants Commission (UGC)building and staged a protest campaign there by demanding authorities  to stop influencing allied health science degree .

Due to this Satyagraha and Protest Campaign the roads in front of Health Ministry and University Grants Commission have been blocked for nearly two hours due to traffic it has been reported.

If the authorities fail to give a  solution for their demand by 20th of April the PSM'S will launch an island wide strike after that date the secretary of the Joint Council Of Professions Supplementary To Medicine Mr.Saman Jayasekera has said.
- April 09, 2014 No comments:

Sri Lankan Parliament has today(09)  felicitated Sri Lankan National Cricketers who have won T20 World Cup 2014  on their visit to the house this morning  .The Cricketers lead by T20 Skipper Lasith Malinga have visited National Parliament at Battaramulla today and they were given the  red carpet welcome by  the Speaker Chamal Rajapaksha as well as both government and opposition members of  the Parliament .

Government and Opposition MP's have fully praised national cricket team  on  their great achievement by winning T20 World Cup last Sunday by beating Indians. also MP'S have  made special speeches on the victory during today's parliamentary sessions while cricketers were seated in the gallery .later the visited Cricketers  had lunch with the Parliamentarians.
- April 09, 2014 No comments: