Security Of Air Ports In Kerala Tightened After LTTE Threats 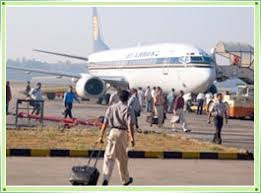 Security of all Air Ports in the Indian State of Kerala was tightened after "Air India" Office in Mumbai received a Threatening Message from the LTTE .It has been reported that Central Industrial Security Force(CISF) tightened the Security of Air Ports in Kerala.

India's Central Intelligence Bureau(CIB) also issued a warning on Thursday night saying that an Elements sympathizing over the LTTE Terrorists would carried out Bomb Attacks targeting the Air Ports across the Southern India.
- March 20, 2009 No comments:

Ministry Of Health in Colombo today Temporary Suspended the Rubella Vaccination Programme after a Girl Student of Matara who was Hospitalized with Allergic Condition after receiving the Vaccine Died early this morning.Ministry was taken this action according to the Advise of President Mahinda Rajapaksha Ministry Sources said.
The Girl Student Pashala Hansani(12) who is the only child of her family died this morning after admitted to the Intensive Care Unit (ICU) of the Matara General Hospital yesterday.

Director General Of Health Services Dr.Ajith Mendis Under a Special Circular issued to the Family Health Bureau and MOH Offices today instructed to stop Rubella Vaccination Programme with Immediate effect.The Girl Student who developed Allergic Symptoms like Vomitting and Headache was in Ventilator of the Intensive Care Unit(ICU) of Matara General Hospital and she died yesterday night. Another 24 Girl Students of the same school were received treatment from the Matara General Hospital and 20 of them were discharged this evening according to the Hospital Sources

Meanwhile A Special Team of Doctors compromising Three Epidemiologists and the Deputy Director General of Health Services(Public Health) Dr.P.Maheepala went to Matara MOH this morning under the instructions of Health Minister Nimal Siripala De Silva to probe on the Rubella Vaccination Incident.The team is due to produce a Full Report on the incident to the Health Secretary Dr.Athula Kahanda Liyanage tomorrow morning..Ministry Of Health also decided to bring a Specialist from the World Health Organization(WHO) to conduct a special probe on the incident."Rubella Vaccination Programme was introduced to Sri Lanka's National Immunization Programme in the year 1996 and since then this is the first time this kind of incident was reported" according to the Health Ministry Sources.President Mahinda Rajapaksha ordered to release Rs.Five Laks for the Parents of the Deceased Girl Student from the Presidents Fund.
- March 20, 2009 No comments: