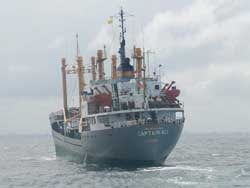 The Investigations on the Vessel Captain Ali arrested by the Sri Lankan Navy yesterday are still underway and according to the Navy Sources except Food and Medicine no Weapons are there in the Vessel.
There are Food,Medicine,Water Bottles and Clutches for the Disabled are found inside the Vessel Sources added.Pro LTTE Associates in U.K were collected donations and dispatched them in to Sri Lanka from this Ship.

The Vessel is currently anchored near the Colombo Harbour under Navy Protection.Sri Lankan Government is due to take an action against the Vessel after Navy Search is finished.The 15 Member Crew of the Vessel including Iceland Naional who is a Member of the Sri Lanka Monitoring Mission and Two Sri Lankan Tamils holding British Passports Two Egyptians and 11 Syrians are still inside the Vessel.