Ten New SSP Posts To Be Promote As DIG's

Ten new senior superintendents of police(SSP) have been promoted to the rank of deputy inspector general of  police(DIG) with effect from 13th of June according to the police media.

However according  to the Police Media Spokesman the new Inspector General Of Police(IGP) will be appointed on 18th of June after the retirement date of former IGP Dr.Mahinda Balasuriya.
- June 10, 2011 No comments: 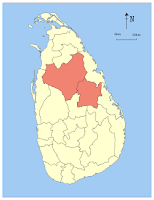 The North Central Provincial Education Ministry has decided to close down 20 Government Schools in Anuradhapura District from today up to next friday(17th) due to security arrangements of the forthcoming Poson Festival.According to the Ministry the schools are shut down in a view to accomodate security personnal arrive to provide security in Anuradhapura and Mihintale areas.
The extra lessons will be conducted for  students of these schools in scheduled dates to cover the lessons lost the ministry has said.
- June 10, 2011 No comments:

The Asian Group including Sri Lanka has expressed their support towards United Nations Secretary General Ban Ki Moon on his bid to elect for the second term of his post.