One Person was killed and more than 30 injured  due to a collision of Three Trains  at Alawwa  this evening.The injured were rushed  to the Alawwa Hospital and around 15 seriously injured persons were transferred to the Kurunagala Teaching Hospital according to the sources.

The dead person identified as a Foreigner who was in the Kandy Bound Train which is one of the collided Trains.Few other Foreigners in side the Trains were too got injured due to the accident.The accident was occurred when the Rambukkana bound train from Colombo had stopped  near Alawwa for a repair  and it was being pushed towards Polgahawela by the Colombo-Kandy Intercity Express which arrived from the same rail way track. Afterweards A Polgahawela bound power set from Colombo had arrived on the same track and crashed on to the rear of the Intercity Express, causing severe damage to the Observation Saloon .

Meanwhile The Railway Authorities have appointed a special committee  to investigate  the incident.
- September 17, 2011 No comments: 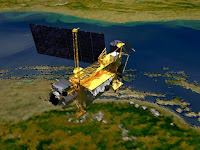 NASA has announced that an out of use 6 tonne NASA Science Satellite will break in to pieces by next week  on it's way to  earth and the debris will land any continent except Antarctica.The Full details on this are as follows.

An out-of-use NASA science satellite will plunge back to the Earth in about a week, but there is absolutely no idea as to where it is going to fall.The 6.5-ton Upper Atmosphere Research Satellite, known by its acronym UARS, will burn up in Earth's atmosphere when it finally falls from the orbit later this month or early October.

NASA says the 20-year-old UARS ran out of fuel in 2005. Pieces of the satellite could land anywhere in the six inhabited continents in a worldwide swath from south of Juneau, Alaska, to just north of the tip of South America.

NASA has estimated a 1-in-3,200 chance that a satellite part could hit someone. Most of it will burn up after entering the atmosphere. Only about 1,200 pounds should survive, scattered over perhaps a 500-mile-wide area, NASA said.
UARS was deployed from the shuttle Discovery in 1991 to study Earth's atmosphere and its interactions with the sun. The $750 million mission measured the concentrations and distribution of gases important to ozone depletion, climate change and other atmospheric phenomena. NASA says readings from UARS provided conclusive evidence that chlorine in the atmosphere, originating from human-produced chlorofluorocarbons, is at the root of the polar ozone hole.

The risk to public safety or property is extremely small. Since the beginning of the Space Age in the late-1950s, there have been no confirmed reports of an injury resulting from re-entering space objects.
The satellite's current orbit is 155 by 174 miles (250 by 280 kilometers), with an inclination of 57 degrees, said NASA. That means the satellite would have to descend into the atmosphere somewhere between 57 degrees north latitude and 57 degrees south.

NASA estimated that the debris footprint would stretch about 500 miles.
That means pieces could fall over most of the world's six inhabited continents as well as its three largest oceans.(INTERNATIONAL BUSINESS TIMES)