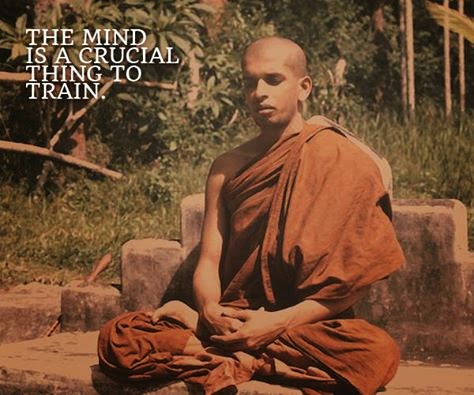 People for the most part, no matter what country they're born in, are more interested in the affairs of the body. They're not all that interested in tending to the heart and mind. They don't look after the heart and mind. When the heart is suffering, they don't look into why it's suffering. They're more wrapped up in looking after the body. When the body's in the slightest pain, they run to the doctor, to the hospital. But when they suffer in their hearts and minds, they aren't all that interested in finding out why.

People who have trained their minds, though, investigate into the reasons and causes. When the heart is suffering, and they've investigated down to the real causes, they'll know how to release the heart from that suffering. You could say that they act as their own doctors. The Buddha was a master doctor, a doctor specializing in the diseases of the heart and mind.

When we listen to the Dhamma and put it into practice, we're said to be studying medicine for the heart and mind. Once we've learned the Dhamma, we train ourselves in line with it. Once the mind attains concentration, we'll have strategies and techniques for looking after our own hearts and minds. When suffering arises in the heart and mind, we'll be able to contemplate it for ourselves and treat it by ourselves. This is why the Buddha says that there are great benefits, great results, for those who practice generosity, virtue, and meditation. People who do this are called sages. The word "sage" here can apply to women or men. It applies to anyone who knows — who knows the affairs of the heart and mind. But these affairs are hard to know. Most people abandon their own minds, throw them away. The mind is a crucial thing to train. And as I've said, we train it through generosity, virtue, and meditation.
- December 16, 2014 No comments:

2015 Budget Proposals Have Been Defeated At The Ambilipitiya Urban Council

The 2015 budget proposals submitted to the  government controlled Ambilipitiya (Sabaragamuwa Province)Urban Council have been defeated today(16) as all the five government MP's in   the council have been refrained from voting during the vote.

The governing United Peoples Freedom Alliance(UPFA) having 5 MP's at the urban council while the opposition United National Party (UNP)is having 2 MP's.During the voting 2 opposition MP's have  voted against the budget proposals while all governing party MP's have refrained from voting.
- December 16, 2014 No comments: