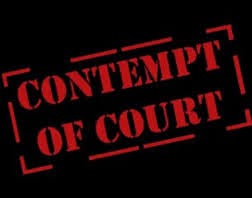 A group of Seven Doctors who were taken the Interim Court Order from Mount Lavinia Magistrate Court to ban activities of Government Medical Officers Association(GMOA) had decided to file a court case against the media sub committee formed by former GMOA Executive Committee in charges of contempt of Court according to the group sources.

The Doctors Group made this decision after examined the illegal things done by members of the said media committee by undermining the court order."The media sub committee currently functioning within the GMOA had illegally used the official logo of the GMOA when inviting media to their press briefings as well as when issuing press releases to the media institutions" they have stressed.

The group has decided to file the contempt of court charges against the media sub committee in Mount Lavinia Magistrate court .
- July 29, 2014 No comments:

Health Workers numbering more than 45,000 belongs to 27 Categories are due to launch an island wide sick note campaign tomorrow(30) in all government hospitals and health institutions by demanding solutions for five of their service demands  the Joint Trade Union Committee has said.

According to the trade union committee ,health workers including Minor Health Staff,Kitchen Chefs ,Lift Operators,Laborers  and Telephone Operators representing 20 trade unions are due to be take part in this sick note campaign.During the trade union action a large number of health workers  involve in sick note campaign  will be marching towards President's Place from Colombo National Hospital to hand over a letter containing  their service demands.

Correcting the salary anomalies of 27 health categories,declaring a 5 day working week for the workers are among the demands that produced by the joint trade union committee.A continuous Fasting Campaign of health workers is currently underway  in front of Colombo National Hospital  to win these demands
- July 29, 2014 No comments: