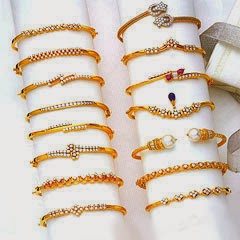 The Sri Lankan Customs Officials have last night arrested Five Indians who tried to smuggle one killo gramme of gold out of the country at Katunayake International Air Port .the group of Indians have tried to board a plane flying to Southern Indian State of Bangalore at the time of their arrest sources said.

The stock of gold jewelery suspects  have tried to smuggle out of the country are worth around Rs.5 Million . one of the suspected Indians arrested had  wore an unfinished gold  bracelets weighing around 200 grammes sources added.the air port customs are conducting further investigations on the incident.
- March 01, 2014 No comments: