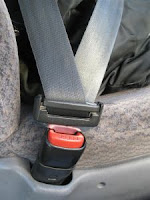 Fastening of Seat Belts in front seats of all cars and dual purpose vehicles with English plates declared as compulsory with effect from tomorrow (01) the Government Information has announced today.

Under this both the driver as well as the person sitting in the front seat of the said vehicles should wear seat belts.

This rule will also be relevant to all registered Buses and Lorries according to the department.
- September 30, 2011 No comments:

The first ever Asia Pacific Stroke Conference to be held in Sri Lanka is currently underway at Cinnamon Grand Hotel in Colombo.More than 400 Foreign Delegates have been registered for this International Conference with 45 renowned International Stroke Specialists attending the three day Conference which will be ends tomorrow(01) according to the Dr.(Mrs) Padma Gunaratne the co chair person of the Conference and  head of the Stroke Unit of Colombo National Hospital .

Addressing a press briefing held at Cinnamon Grand Hotel yesterday regarding this Conference which started yesterday Dr.Padma Gunaratne has said that the number of deaths occurred due to Stroke is in increase in  Sri Lanka.According to the latest statistics available around 3012 Stroke patients have died after admitted to Government Hospitals in the year 2008 she stressed.

High Blood Pressure,Diabetes,High Cholesterol ,Lack of Physical Activity,Obesity are identified as the Risk Factors which caused the Stroke and people are advised to rushed the people to hospitals who are having the Stroke Symptoms such as a severe headache ,loss of the sight of one or both eyes,dizziness,loss the balance or coordination of the body and disability to speak or understand the speeches .

It has been revealed no matter the gender every six seconds a person died in any corner of the world due to the Stroke.
- September 30, 2011 No comments:

The General Assembly of the Government Medical Officers Association (GMOA) has decided yesterday to launch an Island Wide Strike on Monday evening if the authorities have failed  to handover the removed personal file of their President Dr.Anurudda Padeniya to him by 12 noon on Monday .

According to the Assistant Secretary of the GMOA Dr.Sankalpa Marasinha, GMOA will decide on Monday  whether the Strike Action is a  One Day Token Strike else a Continuous one .Earlier the Executive Committee of the GMOA has decided to take a stern action against what they called a politically motivated move by  the  Bribery and Corruption Commission officials as they removed the personal file of Dr.Padeniya without a prior notice.
- September 30, 2011 No comments: