State Of Emergency Was Extended In Parliament With Majority Of Votes

The State Of Emergency was extended by one month with a majority of 109 votes at the Parliament today.While 121 MP's voted in favor of extending the state of emergency 12 MP's voted against it.
- February 08, 2011 No comments:

Welfare Camps set up to accommodate the displaced people due to floods in Batticloe and Ampara Districts of Eastern Province are to be closed as the flood waters in these districts now receding and the displaced people can go to their houses according to officials.All welfare camps set up in the Batticloe District are to be closed by tonight and the Camps in Ampara District will closed down tomorrow(09th). 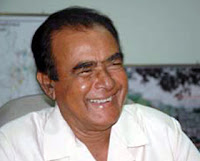 Prime Minister D.M Jayarathne today said in Parliament that the government has learned of a plan of pro-LTTE groups and nations trying to bring the war crimes spot light on Sri Lanka again to the United Nations Human Rights Council(UNHRC) in Geneva.

When proposing a motion to the Parliament to extend the state of emergency by one month the Prime Minister has said that such a motion on war crime allegations against Sri Lanka is to be brought up during the next UNHRC sessions scheduled to be  held in Geneva as revealed by  the diplomatic network.
- February 08, 2011 No comments:

"Thriposha" is a sri lankan made food supplement made with corn,soya beens and milk which is prescribed for mothers and kids.
- February 08, 2011 No comments: