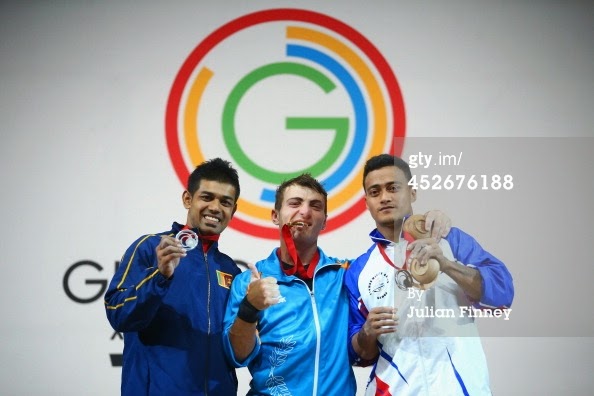 Sri Lankan Weightlifter Sudesh Pieris has won the first medal for Sri Lanka at the 20th Commonwealth Games currently underway in Glasgow,Scotland when he received the Silver Medal in the 62 Kilo Gramme Category worked out yesterday(25).Sudesh who is from Sandalankawa Area is also  the Captain of  104 member Sri Lankan Contingent  to the Commonwealth Games this year .

He was also the Bronze Medalist in the same weightlifting Category at the last Commonwealth Games held in Jawahallal Nehru Stadium in New Delhi,India on 2010.As Sudesh has won the Silver Medal ,Dimitris Minasidis of Cyprus won the Gold Medal in this Category  this morning while Vaipana Loane of Samoa won the Bronze Medal .

Meanwhile the Entomology Assistant Officers have warned that the Dengue Mosquito Density in the City Of Colombo has been increased by 3 folds which stands in the Britaux Index as 20.
- July 25, 2014 No comments: